Serve Others to Get All You Want 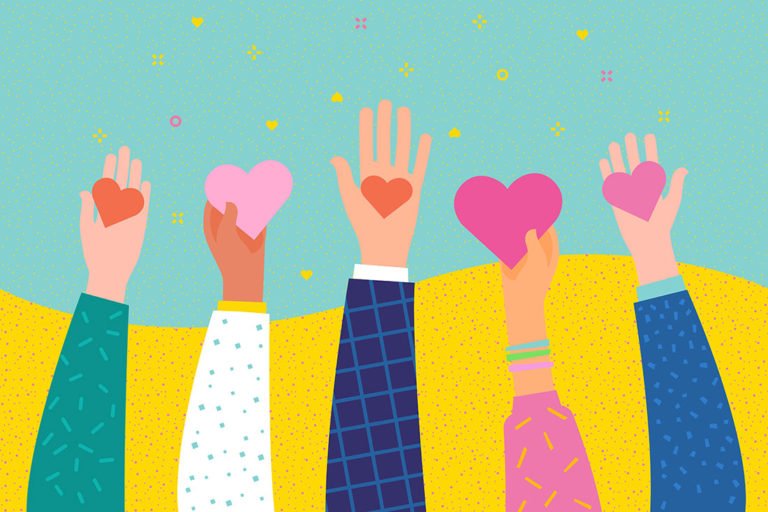 In December you can be sure that every 15 minutes, somewhere in the world, the movie Scrooged is starting.

The TV networks obliterate the airwaves with it around Christmastime, clearly the result of a secret 1988 pact.

Scrooged is the comical retelling of Charles Dickens’ 1843 novella, but what makes a story endure for nearly 200 years?

Bill Murray’s legendary performance helps, but it’s also because everyone can relate to the antisocial miser getting his comeuppance.

Oh, you love money more than your fiancée? She’s gonna drop you like a hot coal. Can’t find some compassion for your employees? Tiny Tim’s ghost will haunt you.

Dickens and Murray… strange bedfellows, but connected by a timeless message: All our problems come from putting ourselves before others.

I’m not making a moralistic argument; whether serving others is the “right thing to do” is a philosophical exercise for another day.

For me, what’s right is what works. And the evidence is overwhelming: The best way to get what you want is through serving others.

Remember that Friends episode where Joey and Phoebe debate whether a truly selfless good deed exists? Do we donate to charity just to help, or because it makes us feel good?

More to the point: Are humans good or evil?

Psychologists have been waging this debate for four decades. Is altruism—placing others’ well-being before our own—real? Or is it just another sneaky trick our ego uses to serve itself?

One researcher believes he’s settled the matter. In his 30-year quest for answers, Dr. Daniel Batson found that humans are hardwired with “empathic concern”: emotions like sympathy, distress, grief and so on, and that this creates Good Samaritan behavior.

Why has evolution favored this trait? Well, in history, the people and societies that looked out for each other survived. Those who didn’t were left to the saber-toothed tigers.

Serving others is literally in our DNA, and selfish acts are a real threat to our survival.

The Law of Reciprocity

“It is every man’s obligation to put back into the world at least the equivalent of what he takes out of it.” ―Albert Einstein

“Great—so our species has a nice-guy streak, so what?” you might say. “I’m a realist [read: cynic], and I’ve seen too many nice guys finish last to be anything other than a ruthless hustlah’.”

Maybe you just lost your job, or your business had a string of bad quarters, and you just can’t afford to give right now.

Actually, we cannot afford not to give, not if we want success.

According to self-help author and speaker Brian Tracy, the universal Law of Reciprocity states that humans have the irresistible drive to repay an act of service with another.

Help someone move, or water their plants? Gotcha! Now they owe you one. Ever notice that in TV and movies, nobody wants a favor from the mobster or politician? It’s understood that one day the favor will come home to roost… and it’ll cost ya.

This need to even the scorecard is so engrained in humans that even though you don’t want to break that guy’s legs, you’ll do it because it’s a request you can’t refuse.

On a brighter note, you can use The Law to attract abundance. Serve someone, and they will feel obligated to pay you back, usually with something greater than you gave.

When “charity muggers” pay us a compliment or a business gives us “free” samples, they’re applying the Law of Reciprocity.

Whether your motivations are altruistic or you’re applying The Law, serving others is the best way to get all that you want. Just a note of caution: People can smell a wolf in sheep’s clothing.

If your hidden intentions are nefarious, this tactic can backfire.

Around the holiday season, it’s easy to feel that good-cheer-to-all and peace-on-Earth glow, and drop a few coins in Santa’s kettle.

But it’s harder to translate those warm and fuzzies into daily habits of service, especially when Fred’s maneuvering for your promotion and your kids have joined the cult of passive-aggressiveness.

Pure altruism won’t carry most people through big challenges, so let’s get clear on how YOU benefit when you serve others.

“No one has ever become poor by giving.” —Anne Frank

Want to get paid? Successful entrepreneurs know that the only way to do that is to create value. Effective salespeople know a sale happens only when you solve a customer’s problem.

And the top performers at work? They’re the ones who frequent that “extra mile.” Here are some tangible rewards that service will bring you:

Higher Grades: A study of 3,450 undergraduate students showed doing any kind of volunteer work caused higher grades. Counterintuitively, those who carved out time to serve spent more time studying, not less. No doubt this created extra job opportunities after school.

Repeat Business and Word of Mouth: In today’s “no kidding” news, one study showed a correlation between higher customer service quality and increased revenues. Happy customers stuck around longer and were more likely to rave to their friends.

Improved Employee Performance: Robert K. Greenleaf pioneered the idea of servant leadership, a style of management that turns a company’s organizational chart on its head; the CEO works for the frontline staff. Fifty years later, his work is still vindicated: Employees who feel like their leaders are serving their needs stay with a company longer, their productivity improves, and they’re more innovative.

Attract New Customers: When you selflessly serve a potential customer—giving them something with no expectation of return—you make it easier for them to buy from you. When the freebie is truly valuable, you establish your company as a credible authority. In our hypercompetitive, zero-degrees-of-separation marketplace, customers have to trust that you care about their well-being.

Get More Job Interviews: In one study, researchers sent fake resumes in response to real job ads. The imaginary “applicants” whose resumes listed volunteer experience were one-third more likely to get an interview than non-volunteers, from both non- and for-profit companies. This was especially true for women. Oh, and volunteers? They enjoy higher wages.

“The happiest people are not those getting more, but those giving more.” —H. Jackson Brown Jr.

You’ll see more money in your pocket and create a thriving business if you serve others, but what’s the point of wealth if you’re not happy? Good news: Science confirms that serving others makes you feel great. It explains why many of the world’s wealthiest are giving away their fortunes through the Giving Pledge. Give, and you’ll get these:

Greater Self-Confidence: That same study of undergraduates showed that volunteers enjoy higher self-esteem, something too many otherwise healthy adults struggle with, something I’ve shown can be improved by changing the way you talk to yourself, and investing more time in self-care.

Feel-Good Hormones: Psychologists now know that the simple act of helping another person produces neurotransmitters like oxytocin—the same that make us feel love for our romantic partner and baby. A bonus: When our brains get hit with oxytocin, we want more. Serving is addictive. Oxytocin also increases trust and cooperation in business interactions, which is why people buy from companies they “love.”

Spending on Others Makes you Happy: Psychologists found that adults who spent even $5 on others created more positive emotions than when they received money. And children? They experienced more happiness when giving away treats versus getting them—especially when the giving was costlier to themselves (forfeiting their own resources). Researchers observed the same addictive virtuous circle here: Prosocial spending encourages more of it.

Light Up Your Brain (in a Good Way): “I wonder what’ll happen when we stick people in this fMRI machine and make them donate to charities?” said researchers in another study. They found that the mesolimbic system lit up in exactly the same way it does when you receive money. This is the same system that’s activated by food, sex, drugs and money. Researchers observed the subgenual cortex sparking, as well—which happens when we look at our own babies and our romantic partners. It feels good to give!

“He who serves the most, reaps the most.” —Robin Sharma

Lately, science has been confirming what the personal development community has known for a long time: that a healthy mind leads to a healthy body. Now we’re finding out that good giving habits also improves your physical health.

Live Longer: I’m shocked when I hear statistics that show people’s chances of dying skyrocket if they retire early (89%) or their spouse dies (66%). But it’s no surprise when you consider that a person’s will to live is tied to having something to live for. Those who volunteer more than 100 hours a year (about two hours a week) are only one-third as likely to die and have better health generally. This isn’t just true for the elderly—the benefits are greater if you start to give earlier in your life. Positive effects are observed regardless of income, education, sex, ethnicity or marital status. Yes, volunteering can help YOU live longer.

Manage Pain: Research shows that when someone facing chronic pain volunteers to serve others who suffer with similar challenges—say chemotherapy—their own pain lessens. The benefits observed are actually greater in the person serving than the person receiving support. In fact, patients report greater benefits from service than from medical care. We lessen our own suffering by doing the same for others. Isn’t that beautiful?

Avoid Disease: Another study showed that U.S. states with higher volunteerism rates had lower incidences of heart disease. And serving others is a great way to battle another terrible disease: depression. Selfless giving enhances our social networks, gives our lives meaning and increases our self-esteem, all of which rip depression out by the roots.

“You can have everything in life you want, if you will just help other people get what they want.” —Zig Ziglar

Walking around in a healthy body, money in your pockets and a smile on your face… what more do you want out of life? Well, sharing all that joy with someone else would be swell. I’ve got you covered: Serving others improves your relationships.

A Thriving Love Life: Everyone wants to know what makes for a highly successful relationship, and so when researchers Linda and Charlie Bloom investigated, they found one common denominator: reciprocal giving. Their book, Secrets of Great Marriages, characterizes each partner’s motivation one of “enlightened self-interest,” where we give and give to our partner because it brings us joy… and surprise back massages, of course.

Improved Reputation: Due to the Law of Reciprocity, when you help someone, they want to help you back, and vice versa. When we carry out this dance of “you scratch my back I scratch yours” enough times, and prove ourselves to be trustworthy enough to stick to the agreement, our reputation improves. We become reliable, not just a constant taker.

Get Along Better: Can’t we all just get along? Yes. College students who performed community service were better able to work cooperatively, and resolved conflicts faster. Even in cases where two people don’t like each other much, we can often get them to do us a favor by simply doing one for them first, or giving them a gift.

“All men are made for one another.” —Marcus Aurelius

In those three decades, Costco’s market returns were twice GE’s.

This is not an anomaly. In Good to Great, Jim Collins studied 1,435 companies’ performance over 40 years to find the best. He observed that the most successful companies had leaders that put others, not themselves, first: modest, sharing praise, accepting blame and grooming their successors to thrive.

It’s hard to argue with what’s natural. We’re born altruistic and evolved for reciprocity. The Universe optimizes for the collective over the individual.

There’s nothing wrong with healthy competition or enlightened self-interest. But there’s only one clear path to truly get what we want: to serve, and seek no reward.